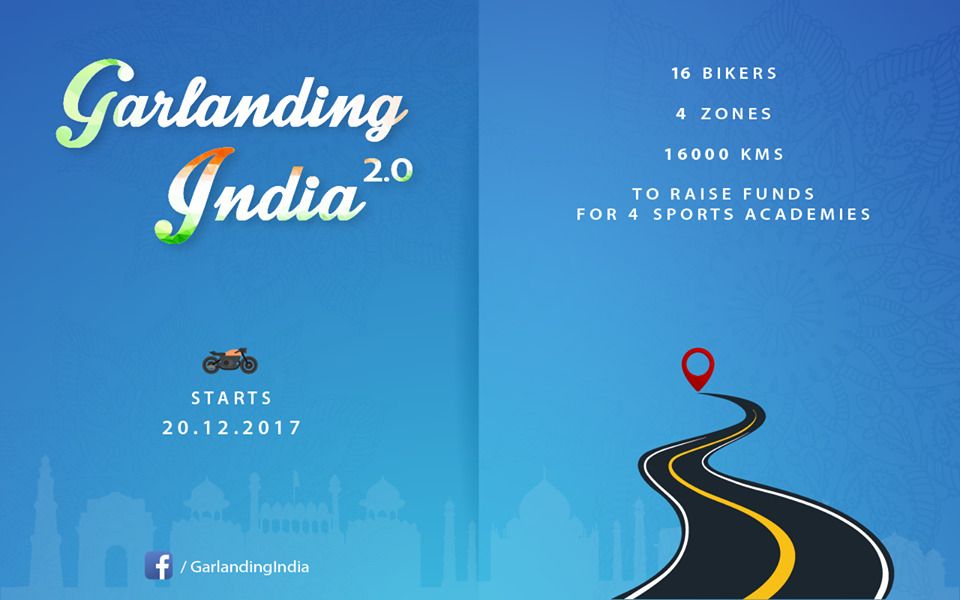 Garlanding India 2.0 will involve a core team of 16 volunteer bikers. 4 sets of 4 riders each will ride 4000 kms each in 4 different segments (South, North, East, West) of the country. The first segment, called the Southern Spin, covering the South of India, was flagged off from IIM Bangalore campus on December 19 2017; and lasted for ten days. The riders were hosted along the route by volunteer hosts and by the IIMS at Kozhikode and Trichy. The riders also visited the Usha School of Athletics run by sprint legend PT Usha

The second segment, called the Eastern Essay, will see 5 riders (all from the graduating MBA batch of 2018 of XLRI) riding on 4 bikes across the North East, from March 8 to March 23. The riders will be officially flagged off from the IIM C campus in Kolkata on March 7th. They will again be hosted by volunteer hosts. They will be visiting the Mary Kom Regional Boxing Foundation, the boxing academy run by boxing great Mary Kom.

The focus of Garlanding India 2.0 is on India’s children. For many of the kids from the underprivileged sections, good training in sports, along with good nutrition and decent school education offers the ray of hope to break out of their condition. But sadly for many Indian kids even this option is ruled out. India has a poor record on infant nutrition and health. 38% of Indian kids under the age of 5 are stunted and 21% of them are severely wasted; for these kids sports is never an option.

We invite you to donate to the beneficiary of your choice, starting with as small an amount as Rs.500. And then be happy in the knowledge that you would have contributed to bringing on to the world stage a kid who might otherwise have languished away.

The riders of the Eastern Essay will be riding from Kolkata to Siliguri, Guwahati, Imphal, Silchar, Shillong, Guwahati, Siliguri and back to Kolkata. You can track the live location of riders on this website.

Come, contribute! Be a part of this exciting endeavour.